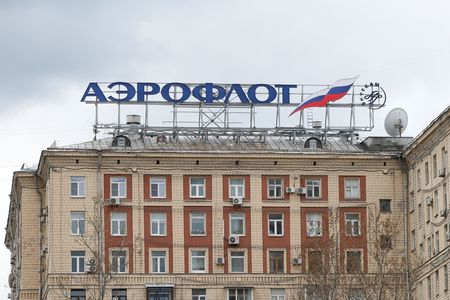 LONDON (Reuters) – Russia’s biggest airline, Aeroflot, said on Friday it had bought eight Airbus A330 aircraft from foreign leasing companies “as part of the fulfilment of contractual obligations”.

More than 400 aircraft leased from Western firms, worth almost $10 billion, have been stranded in Russia since Western sanctions forced the lessors to terminate their contracts and Russia barred its airlines from returning the planes.

Aeroflot did not specify which firms the aircraft had been leased from. But the purchase could be a bid to maintain good relations with lessors by making use of an exemption to European Union sanctions against Russia in respect of aircraft financial leases – which involve purchase when the lease ends.

To ensure that they can continue to have valid airworthiness certificates and Russian airlines can keep using them, Russian authorities have been transferring the aircraft to Russia’s own registry.

Meanwhile, leasing firms have resigned themselves to lengthy insurance claims to try to recover some of the lost value of the aircraft.

The largest claim has been made by Dublin-based AerCap, the world’s biggest aircraft lessor, which has submitted a $3.5 billion insurance claim for more than 100 jets.

AerCap did not immediately respond to Reuters calls seeking comment.

EU regulations governing sanctions imposed in response to Russia’s military campaign in Ukraine generally prohibit “the award and continued execution of public contracts and concessions with Russian nationals and entities or bodies established in Russia”. Aeroflot is majority-owned by the Russian state.

But one of the exemptions enacted on April 8 says national authorities in the EU may authorise “the execution of an aircraft financial lease concluded before 26 February 2022”, as long as it is “strictly necessary to ensure lease re-payments” and no payment is made beyond the transfer of the aircraft.