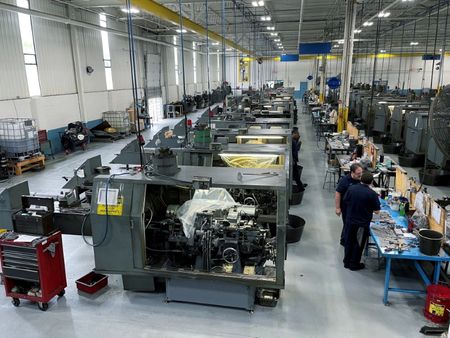 WASHINGTON (Reuters) – New orders for U.S.-made capital goods and shipments increased solidly in May, pointing to sustained strength in business spending on equipment in the second quarter, but rising interest rates and tighter financial conditions could slow momentum.

The nearly broad rise in orders reported by the Commerce Department on Monday occurred despite deteriorating business and consumer sentiment as well as heightened fears of a recession. The gains partly reflected higher prices. The Federal Reserve is aggressively tightening monetary policy to quell inflation.

“There’s some inflation behind the increase in orders, but, nevertheless, there are a lot of dollars flowing through the economy right now,” said Christopher Rupkey, chief economist at FWDBONDS in New York. “Businesses would not order new equipment if they thought consumers and other companies were looking to pull back their purchases.”

Those orders were up 10.2% on a year-on-year basis in May. Last month’s increase reflected a 1.1% rise in machinery orders. There was also strong demand for primary metals as well as computers and electronic products. But orders for electrical equipment, appliances and components fell 0.9%, while demand for fabricated metal products was unchanged.

The better-than-expected increase in core capital goods orders underscored underlying strength in manufacturing, which accounts for 12% of the economy, despite weak factory surveys. A survey from S&P Global last week showed business confidence dove in June to the lowest level since September 2020.

Demand for goods remains strong even as spending is reverting back to services. Production also continues to be underpinned by businesses still rebuilding inventories, even as some major retailers like Walmart and Target have reported that they are carrying too much merchandise.

“We’ve seen two of the largest inventory builds on record in the past two quarters, but, taken in the context of still solid sales, inventories are not yet at a concerning level in our view,” said Tim Quinlan, a senior economist at Wells Fargo in Charlotte, North Carolina. “We take the rebuild in inventories as a signal that supply chain problems are slowly easing.”

Stocks on Wall Street were mixed. The dollar fell against a basket of currencies. U.S. Treasury yields rose.

Business spending on equipment is on track to grow again this quarter, though at a slower pace than the 13.2% annualized rate notched in the January-March period.

Robust business investment in equipment helped to sustain strong domestic demand in the first quarter even as the economy contracted at a 1.5% rate, hit by a record trade deficit. Growth estimates for the second quarter range from as low as a 0.3% rate to as high as a 2.9% pace.

The Fed this month raised its policy rate by three-quarters of a percentage point, its biggest hike since 1994. The U.S. central bank has increased its benchmark overnight interest rate by 150 basis points since March.

“The unexpected strength won’t change anything for monetary policy except, perhaps, making the Fed just a smidgen more comfortable with their next rate hike decision,” said Will Compernolle, a senior economist at FHN Financial in New York.

Orders for durable goods, items ranging from toasters to aircraft that are meant to last three years or more, advanced 0.7% in May after rising 0.4% in April.

They were lifted by a 0.8% gain in orders for transportation equipment, which followed a 0.7% increase in April.

Motor vehicle orders climbed 0.5% after edging up 0.1% in April. Orders for the volatile civilian aircraft category fell 1.1%. Boeing reported on its website that it had received 23 aircraft orders in May, down from 46 in April.

While manufacturing is showing resilience, higher borrowing costs are cooling the housing market.

A separate report on Monday from the National Association of Realtors showed its Pending Home Sales Index, based on signed contracts, rose 0.7% last month. The increase, however, only reversed a tiny portion of the prior six months’ declines, leaving contacts down 13.6% on a year-on-year basis.

“Higher rates have been weighing significantly on the housing market and will continue to do so in the immediate future,” said Daniel Silver, an economist at JPMorgan in New York.