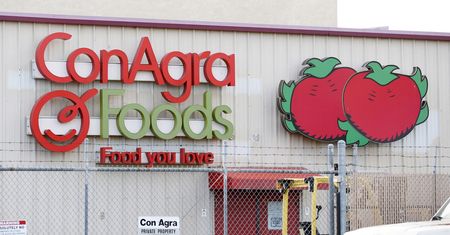 Shares of Conagra fell about 9% as the company also reported a 6.4% drop in fourth-quarter sales volumes with consumers showing signs of pushing back against price increases.

Lingering supply-chain issues and skyrocketing freight and ingredient costs have forced Conagra to raise prices at a time when decades-high inflation pinches spending by American households, eating in to the company’s profit margins.

“We’ve got to take inflation-justified pricing to recover our margins,” Chief Executive Officer Sean Connolly said on a call with analysts.

The more-than-a-century-old company, however, said it expects sales volumes to take a bigger hit in fiscal 2023 due to continued price hikes.

Conagra now expects full-year adjusted profit per share to grow by 1% to 5% compared with expectations of an 8.3% growth, with gross inflation projected to be in the low-teen percentage range for the year.

Connolly said in an interview with Reuters that spreads and hot dogs are categories where consumers are more sensitive to price hikes. Conagra sells Earth Balance buttery spreads and Hebrew National hot dogs.

On Wednesday, U.S. consumer prices in the 12 months through June jumped 9.1%, their biggest gain since November 1981, cementing the case for a supersized rate hike by the Federal Reserve.

“There will be some pushback among retailers and pushback among the consumers … Going forward, it’s going to be a little bit more difficult for packaged food companies to increase prices,” CFRA analyst Arun Sundaram said.

Connolly said talks with retailers “remain constructive.” He said Conagra has to protect its margins by raising prices to continue delivering new and improved products to the retailers it supplies. Those retailers, including Kroger Co and Walmart Inc, prioritize the sales growth new products help deliver, he said.

Net sales rose by a smaller-than-expected 6.2% to $2.91 billion in the quarter, while adjusted profit of 65 cents per share beat expectations by 2 cents.