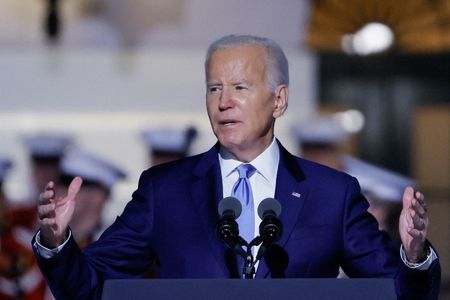 By David Shepardson and Eric Beech

As of June 30, 43 million borrowers held $1.6 trillion in federal student loans. About $430 billion of that debt will be canceled, CBO estimated. CBO previously projected that some of the funds canceled by Biden’s action would eventually have been forgiven anyway.

Of 37 million borrowers with direct loans from the federal government, CBO estimated 95% of borrowers meet the income criteria for eligibility and 45% of income-eligible borrowers will have their entire outstanding debt canceled.

In August, the White House released a “cash flow” estimate of foregone loan repayments of $24 billion a year, or about $240 billion over a decade – assuming that 75% of eligible borrowers apply.

White House Chief of Staff Ron Klain said on Twitter the CBO estimate is a 30-year score rather than a more common 10-year estimate.

He said the CBO is consistent with the White House estimate and CBO “puts the first year cost at $21B.”

Reuters reported in August that non-government budget analysts projected the program’s total 10-year cost at $500 billion to $600 billion, including extending a repayment pause on all federal student loans through Dec. 31 and reducing future payments based on income.

The U.S. government in March 2020 temporarily suspended interest and payments on federal student loans at the start of the COVID-19 pandemic. The extension of that pause from September through Dec. 31 will increase outstanding student loan costs by a further $20 billion, CBO said.

The CBO said its $400 billion “present-value” cost estimates do not include any effects of the actions impacting income-driven repayment plans, which the Committee for a Responsible Federal Budget estimates will cost a further $120 billion.

Bharat Ramamurti, deputy director of the White House’s National Economic Council, told reporters last month the plan was fiscally justified because the federal deficit was on track for a $1.7 trillion reduction for fiscal 2022 compared to the prior year.

CBO acknowledged its estimates include big unknowns, especially the uncertain projection “of how much borrowers would repay if the executive action canceling debt had not been undertaken and how much they will repay under that executive action.”