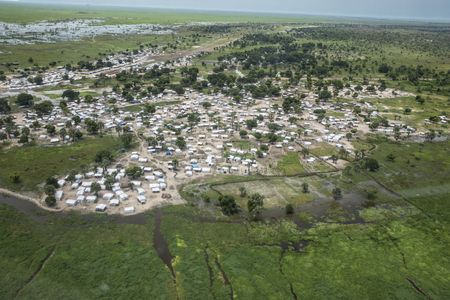 JUBA (Reuters) -Up to 7.8 million people in South Sudan, two thirds of the population, may face severe food shortages during next year’s April-to-July lean season due to floods, drought and conflict, United Nations agencies said on Thursday.

The shortages are worse than at the height of a civil war in 2013 and 2016, the Food and Agriculture Organization, the U.N. Children’s Fund UNICEF and the U.N. World Food Programme (WFP) said.

“The decline in food security and high prevalence of malnutrition is linked to a combination of conflict, poor macroeconomic conditions, extreme climate events, and spiralling costs of food and fuel,” they said in a statement.

“At the same time, there has been a decline in funding for humanitarian programmes despite the steady rise in humanitarian needs.”

Over one million people were affected by torrential rain and flooding at the end of October, the U.N. Office for the Coordination of Humanitarian Affairs (UNOCHA) has said.

The opening of Uganda’s dams to relieve congestion would likely exacerbate flooding downstream in South Sudan, it added.

The WFP in June said it was forced to suspend some food aid to South Sudan just as it was facing its “hungriest year” since independence. In August, the U.N. agencies estimated that 7.7 million suffered severe food shortages in the country in the April-July period between two harvests.

South Sudan erupted into civil war shortly after declaring independence from Sudan in 2011 and while a peace agreement signed four years ago is largely holding, the transitional government has been slow to unify various military factions.

“Urgent action is required …we need to refocus our attention and redirect resources,” Josephine Lagu, South Sudan’s Minister of Agriculture and Food Security said during the report’s release.

(Writing by Hereward Holland;Editing by Sofia Christensen and Tomasz Janowski)