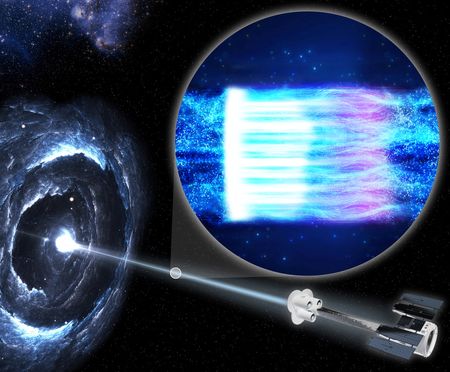 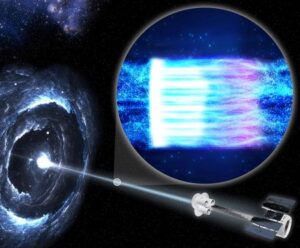 The IXPE spacecraft, at right, observes a blazar, a black hole surrounded by a disk of gas and dust with a bright jet of high-energy particles pointed toward Earth, called Markarian 501 in an undated illustration. The inset illustration shows high-energy particles in the jet (blue). When the particles hit a shock wave, depicted as a white bar, the particles become energized and emit X-rays as they accelerate. Moving away from the shock, they emit lower-energy light: first visible, then infrared, and radio waves. Farther from the shock, the magnetic field lines are more chaotic, causing more turbulence in the particle stream. Pablo Garcia (NASA/MSFC)/Handout via REUTERS