Tesla falls on growing angst over Musk’s focus on Twitter 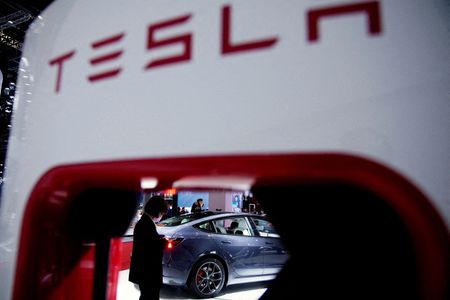 (Reuters) – Shares of Tesla Inc fell nearly 6% on Tuesday after a string of brokerages cut their price targets on the electric-vehicle maker’s stock, citing the risk from Elon Musk’s Twitter distraction.

Analysts say investors are worried that Musk may need to sell shares further to fund Twitter and sentiment around the acquisition of the social media firm could hurt the EV maker’s brand.

Evercore ISI, which slashed its price target on the company’s shares to $200 from $300 said investors fear damage to the Tesla brand.

Daiwa Capital Markets also cut its price target to $177 from $240, citing a “higher risk profile from the Twitter distraction”.

Tesla shares, which have lost nearly 60% of their value so far this year, closed down 0.2% on Monday as Twitter users voted decisively in a poll for Musk to step down as chief executive of the social media platform.

The price target cuts come ahead of Tesla’s quarterly deliveries report expected in early January amid weakening demand in China.

Daiwa lowered the company’s delivery estimate by 5% for 2023 and forecast an 8% reduction in revenue per unit year-over-year.

Musk has said Tesla targets 50% growth in delivery volumes annually, however, the electric-vehicle maker said it will miss the target this year due to logistics issues.

Graphic: Eyes on the road- https://www.reuters.com/graphics/TWITTER-POLICY/zjpqjjawnvx/chart.png

(Reporting by Akash Sriram in Bengaluru; Editing by Shounak Dasgupta)