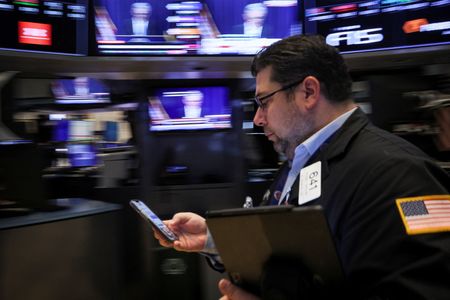 (Reuters) – Wall Street’s major indexes jumped over 2% on Tuesday as investors scooped up shares of megacap growth and energy companies after the stock market swooned last week on worries over a global economic downturn.

Investors are trying to assess how far stocks can fall as they weigh risks to the economy with the Federal Reserve taking aggressive measures to try to tamp down surging inflation. The S&P 500 earlier this month fell over 20% from its January all-time high, confirming the common definition of a bear market.

“Do I think we have hit bottom? No. I think we are going to see more volatility, I think the bottoming process will likely take some time,” said Kristina Hooper, chief global market strategist at Invesco. “But I do think it is a good sign to see investor interest.”

The energy sector, the top-gaining S&P 500 sector this year, surged 5.1% after tumbling last week. Every sector gained at least 1%.

The Fed last week approved its largest interest rate increase in more than a quarter of a century to stem a surge in inflation.

Investors are pivoting to Fed Chair Jerome Powell’s testimony to the U.S. Senate Banking Committee on Wednesday for clues on future interest rate hikes and his latest views on the economy.

Investors are “trying to read the tea leaves to see how aggressive the Fed is going to get,” said Chuck Carlson, chief executive officer at Horizon Investment Services in Hammond, Indiana. “That’s a hard question to answer right now because they are going to see what happens to the inflation story.”

Meanwhile, Goldman Sachs now expects a 30% chance of the U.S. economy tipping into recession over the next year, up from its previous forecast of 15%.

In company news, Kellogg Co shares rose about 2% after the breakfast cereal maker said it was splitting into three companies.

Spirit Airlines shares jumped 7.9% after JetBlue Airways said on Monday it sweetened its bid to convince the ultra-low cost carrier to accept its offer over rival Frontier Airlines’ proposal.

Advancing issues outnumbered decliners on the NYSE by a 2.66-to-1 ratio; on Nasdaq, a 2.22-to-1 ratio favored advancers.

About 12.4 billion shares changed hands in U.S. exchanges, in line with the 12.4 billion daily average over the last 20 sessions.