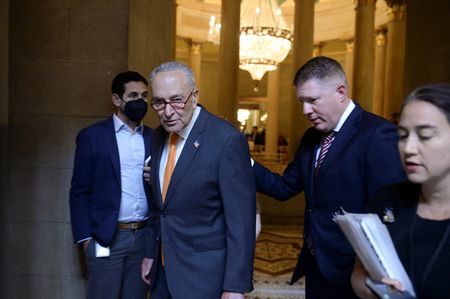 “The cost of insulin has skyrocketed in recent years and the Insulin Act will make this life-saving medication more affordable by capping the cost of insulin at $35 a month,” Schumer said in a statement. “I will put this bipartisan legislation on the Senate floor very soon.”

The legislation from Democratic Senator Jeanne Shaheen and Republican Senator Susan Collins was unveiled Wednesday. In the narrowly divided Senate, Schumer will have to get at least 10 of the chamber’s 50 Republicans to support the bill, assuming all 50 of the Democratic caucus members line up behind it.

Around 8.4 million of the 37 million people in the United States with diabetes use insulin, according to the American Diabetes Association.

About one in five insured Americans pay more than $35 per month for the treatment, while the rest pay about $23 per month, according to a 2021 report on drug prices by health information company IQVIA.

Three companies — Sanofi SA, Eli Lilly and Co and Novo Nordisk — have long dominated the U.S. insulin market. The trio own some 90% of the market for insulin, which was invented in the 1920s but continues to rise in cost to consumers.

The U.S. House of Representatives in March passed a bill capping monthly out-of-pocket insulin costs for those with health insurance at $35 as senators were drafting a wider bill that also provided incentives for drugmakers to lower list prices.

(Reporting by Kanishka Singh in Washington; Editing by Mark Porter)