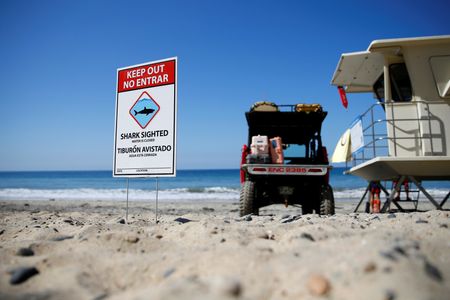 (Reuters) – Beachgoers in some urban areas are probably swimming near sharks without realizing it, according to a University of Miami study that tracked their movements off the southern Florida coast.

As part of the study, three different species of shark – bull, nurse, and great hammerhead – were tagged with small transmitters and their movements monitored for several years.

The researchers had expected sharks to stay clear of crowded areas like large land animals tend to do, but instead found them spending a significant amount of time in waters where people like to take a dip.

“Although this might make you a bit nervous, to me it just proves the point that sharks really don’t want to bite people, and that, in fact, sharks really tolerate people and tend to avoid them,” said Neil Hammerschlag, director of the University of Miami’s Shark Research & Conservation Program.

Hammerschlag advises beachgoers to avoid swimming during periods of low visibility and in areas where people are fishing, but says the study is more concerning for sharks given they face threats from fishermen and polluted shorelines.

“I would say this news is probably worse for the sharks than it is for us humans,” he said.