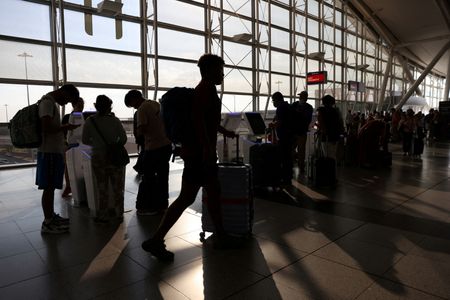 WASHINGTON (Reuters) – Major U.S. airlines told the U.S. Transportation Department (USDOT) they will provide meals for customers delayed by three hours and hotel rooms for stranded passengers if prompted by issues under the airlines’ control.

Transportation Secretary Pete Buttigieg said on Aug. 19 that he would publish by Friday, ahead of the busy Labor Day holiday travel weekend, an “interactive dashboard” for air travelers to compare services each large U.S. airline provides when the cancellation or delay was due to circumstances within the airline’s control. Buttigieg had written airline chief executives asking them “at a minimum” to provide meal vouchers for delays of three hours or more and lodging for those who must wait overnight because of disruptions within the carrier’s control.

Buttigieg also warned USDOT is “contemplating options” to write new rules “that would further expand the rights of airline passengers.”

In the past, some airline customers had to know to ask for vouchers or hotels from airlines.

Some airlines said in updated customer service plans that if they cannot find a hotel room, they will provide a voucher or reimburse stranded passenger if they find a reasonably priced room on their own and will reimburse them for transportation.

Southwest Airlines said if meal vouchers are not available for a three-hour airport delay under its control they would honor reasonable requests for reimbursement.

JetBlue will provide $12 meal vouchers and United Airlines will give meal vouchers for the “reasonable cost of a meal at airport food vendors. If you don’t automatically get one, just ask us” for three-hour delays under their control.