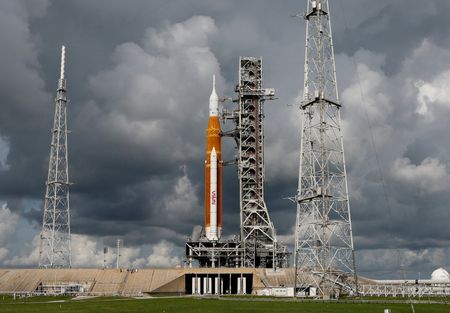 NEW YORK (Reuters) -Aerojet Rocketdyne Holdings Inc, the U.S. rocket maker whose $4.4 billion sale to Lockheed Martin Corp was blocked by antitrust regulators in February, is soliciting offers from potential suitors, including private equity firms, according to people familiar with the matter.

Aerojet, which is providing propulsion engines for NASA’s Artemis 1 moon rocket, is working with advisers on an auction process and asked for indications of acquisition interest earlier this month, the sources said.

The company, which has a market value of $3.6 billion, may decide not to sell itself if it fails to attract an offer it deems attractive, the sources added.

They requested not to be identified because the matter is confidential. An Aerojet spokesperson declined to comment.

Aerojet shares jumped 7% to $48.46 in morning trading in New York on Tuesday.

The El Segundo, California-based company prevailed in a battle for control of its board against former executive chairman Warren Lichtenstein last summer but remains under pressure to boost its performance. Activist hedge fund Elliott Investment Management disclosed it had accumulated a 3.7% stake in Aerojet in August.

Aerojet Chief Executive Eileen Drake said in September that “low to mid-single-digit” sales growth was most probable for the company this year.

Drake added that she expects more orders for Aerojet’s defense equipment as the U.S. military replenishes its inventory after supplying Ukraine weapons for its war with Russia.