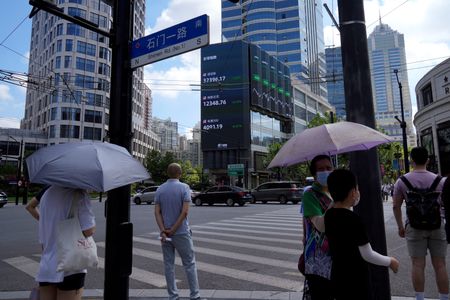 New York (Reuters) – Global equities and the U.S. dollar advanced on Monday despite weaker-than-expected economic data in China that prompted its central bank to cut its lending rate, stoking concerns of a global recession.

China’s strict COVID-19 restrictions have hobbled activity at its main manufacturing hubs and popular tourist spots, including Shanghai, even as a deepening downturn continues in the property market.

Markets reversed earlier session losses and were slightly higher. The MSCI world equity index, which tracks shares in 50 countries, was up 0.23%. Overnight in Asia, MSCI’s broadest index of Asia-Pacific shares outside Japan had closed 0.34% lower.

“You’ve been seeing a slowing trend in China amplified by the lockdowns,” said Tom Plumb, portfolio manager at Plumb Balanced Fund in Wisconsin.

“The credit problems they’ve had especially with real estate developers, that’s going to tie their hands for how aggressive they can go back to stimulation. But I think it’s a sign they’re going to try to be more accommodative.”

The U.S. dollar strengthened following news of the Chinese central bank action amid disappointing data. The dollar index, which measures the greenback against six peers, rose 0.785%, with the euro down 0.97% to $1.0158.

Oil prices dropped by more than 3% on demand concerns after the weak data from China, one of the largest importers of crude. Brent crude futures settled down 3.1% to $95.10 a barrel, while U.S. West Texas Intermediate crude closed at $89.41, down 2.9%.

U.S. Treasury yields were slightly lower as the market continued to assess to what extent a slowdown in inflation could impact the U.S. Federal Reserve’s monetary tightening policies.

Gold fell over 1% to its lowest in a week on Monday amid sharp declines across precious metals due to a stronger dollar, with concerns over further rate hikes by the U.S. Federal Reserve adding to pressure on bullion. 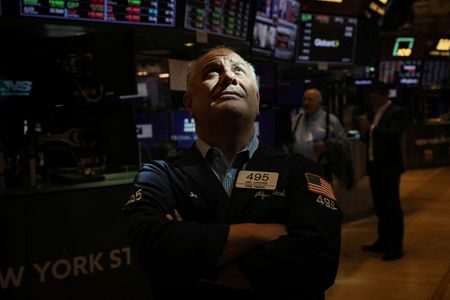