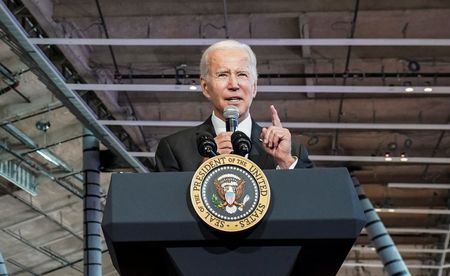 By Jeff Mason and Steve Holland

Biden signed the $430 billion bill, seen as the biggest climate change package in U.S. history, into law last month in a low-key ceremony. The Tuesday event on the White House South Lawn brought together lawmakers, cabinet members, activists and interest groups who supported it, and gave Biden an opportunity to tout drug price caps, electric vehicle grants and a minimum corporate tax, key issues for his political base.

Biden said the law was one of the most significant in U.S. history. “Today offers proof that the soul of America is vibrant. The future of America is bright and the promise of America is real,” he told the crowd.

The event brought some musical star power too, with singer-songwriter James Taylor opening it with a performance.

“It strikes me that this is a time when the world needs to cooperate … more than ever before,” Taylor said, referring to the climate change crisis.

The event coincided with the release of Labor Department figures that showed an unexpected August rise in U.S. consumer prices, as rent and food continued to climb. The economy continues to be the biggest issue for voters ahead of the November midterm elections, posing risks for Democrats trying to maintain control of Congress.

“It will take more time and resolve to bring inflation down, which is why we passed the Inflation Reduction Act to lower the cost of healthcare, prescription drugs and energy,” Biden said in a statement earlier in the day.

Rating agencies Moody’s Investors service and Fitch Ratings told Reuters last month they expect the bill to cut inflation, but over the medium to long term, not this year.

Democratic leaders used the event to take aim at Republicans, who did not support the bill. They sought to paint Republicans as obstructionists who have no interest in solving problems.

Republicans suggest the legislation will lead to higher energy prices and aggressive audits from the Internal Revenue Service.

In addition to providing incentives for the clean energy industry, the law allows Medicare to negotiate lower drug prices for the elderly, seeks to ensure corporations and wealthy people pay their taxes through beefed-up IRS resources, and aims to combat inflation by reducing the federal deficit.

Biden had hoped to secure a trillion-dollar-plus “Build Back Better” bill with measures to fight global warming and tackle other social issues but could not get it through the 100-member U.S. Senate, which is evenly divided between Democrats and Republicans and whose rules require 60 votes to advance most legislation.

The Inflation Reduction Act passed with support from and concessions to Senator Joe Manchin of West Virginia, a conservative Democrat who has backed fossil fuel projects and opposed the more expensive bill. At the Aug. 17 signing ceremony, Biden gave Manchin the pen he used to sign the legislation into law. “Thanks for sticking with what you said you’d do,” Biden told Manchin on Tuesday.

As a presidential candidate Biden promised to make fighting global warming a top priority, returning the United States to the international Paris climate accord, from which Republican President Donald Trump had withdrawn. He also pledged to prioritize clean energy, electric vehicles, and lower greenhouse gas emissions.

Younger, left-leaning voters are especially eager to fight climate change, and the president and his allies have sought to appeal to them ahead of the congressional elections in November in which Democrats risk losing control of the House of Representatives and Senate.