DETROIT (Reuters) -President Joe Biden on Wednesday will announce the approval of the first $900 million in U.S. funding to build EV charging stations in 35 states as part of a $1 trillion infrastructure law approved in November, the White House said.

Congress approved nearly $5 billion over five years to give grants to states to build thousands of electric vehicle charging stations. At an appearance at the Detroit auto show, Biden will also announce that U.S. government purchases of EVs have risen dramatically.

In 2020, less than 1% of new federal acquisitions were electric, which more than doubled in 2021 and in 2022 “agencies have acquired five times as many EVs as all of last fiscal year,” the White House said.

Legislation signed in August by Biden awards the U.S. Postal Service (USPS) $3 billion in funding to buy more EVs and charging infrastructure. USPS in July told Reuters last month it is proposing to significantly increase EV purchases, proposing to buy at least 25,000 EVs out of its initial order of 50,000 delivery vehicles from Oshkosh, up from USPS’ prior plan to buy at least 10,019 EVs.

By 2030, Biden wants 50% of all new vehicles sold to be electric or plug-in hybrid electric models and 500,000 new EV charging stations; he has not endorsed the phasing out of new gasoline-powered vehicle sales by 2030. 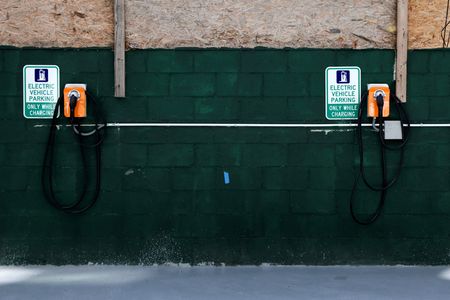